One Punch Man is about a character named Saitama, a man bored with his life who decided to become a superhero for fun. One day he encountered a monster that was looking for a cleft-chinned child who had pulled a prank on them. The monster saw how bored and hopeless Saitama’s eyes were and decided to spare him and continued his search. Saitama happens to come across the child, but decides not to warn him. The child is soon attacked by the monster, but is saved by Saitama. Everyone was surprised by his actions including himself. He soon defeated the monster and found the thrill of becoming a superhero.

The One Punch Man Opening, The Hero!! Set fire to the furious fist, is performed by JAM Project. It’s the opening for One Punch Man Season 1, and it’s beloved by fans because of its strong build-up and hyped song lyrics. It’s a great song to jam to if you’re gearing for a long work-out or finishing deadlines. Download One Punch Man opening to set your mood to be productive. It’s the type of song that makes you want to exercise, work hard and set your goals for the day. You can download the One Punch Man opening with ZEUS MUSIC.

With the use of ZEUS MUSIC, it will allow you to record and download one audio and video at a time. Upgrade to the full for unlimited downloads. Click now!

ZEUS MUSIC is an all around video software that you can use to download, convert and edit music. It also has video downloading capabilities with the use of links, auto-detection, or screen recordings. You can find all these features wrapped all in one package!

Using your PC browser, go to youtube.com and search for your One Punch Man opening theme song to download. Copy the URL of the video. Launch ZEUS MUSIC and go to the “Music” tab. In the “Download” section click the “Online Video To Audio” button found on the upper right corner. A box will appear in front of your screen, paste the URL and click “Add to Download”. 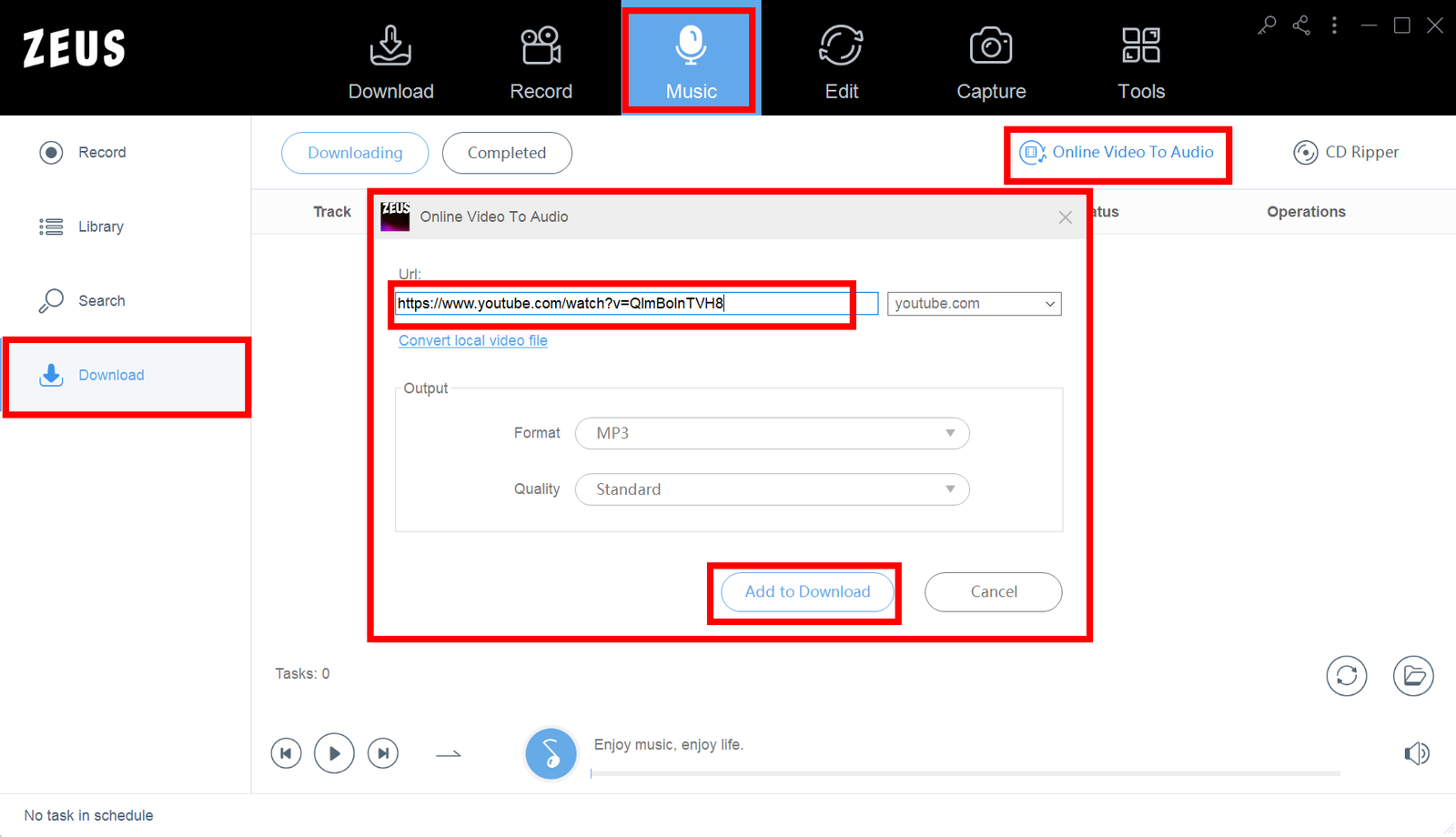 You’ll see your video in the “Downloading” area. Wait for it to complete. 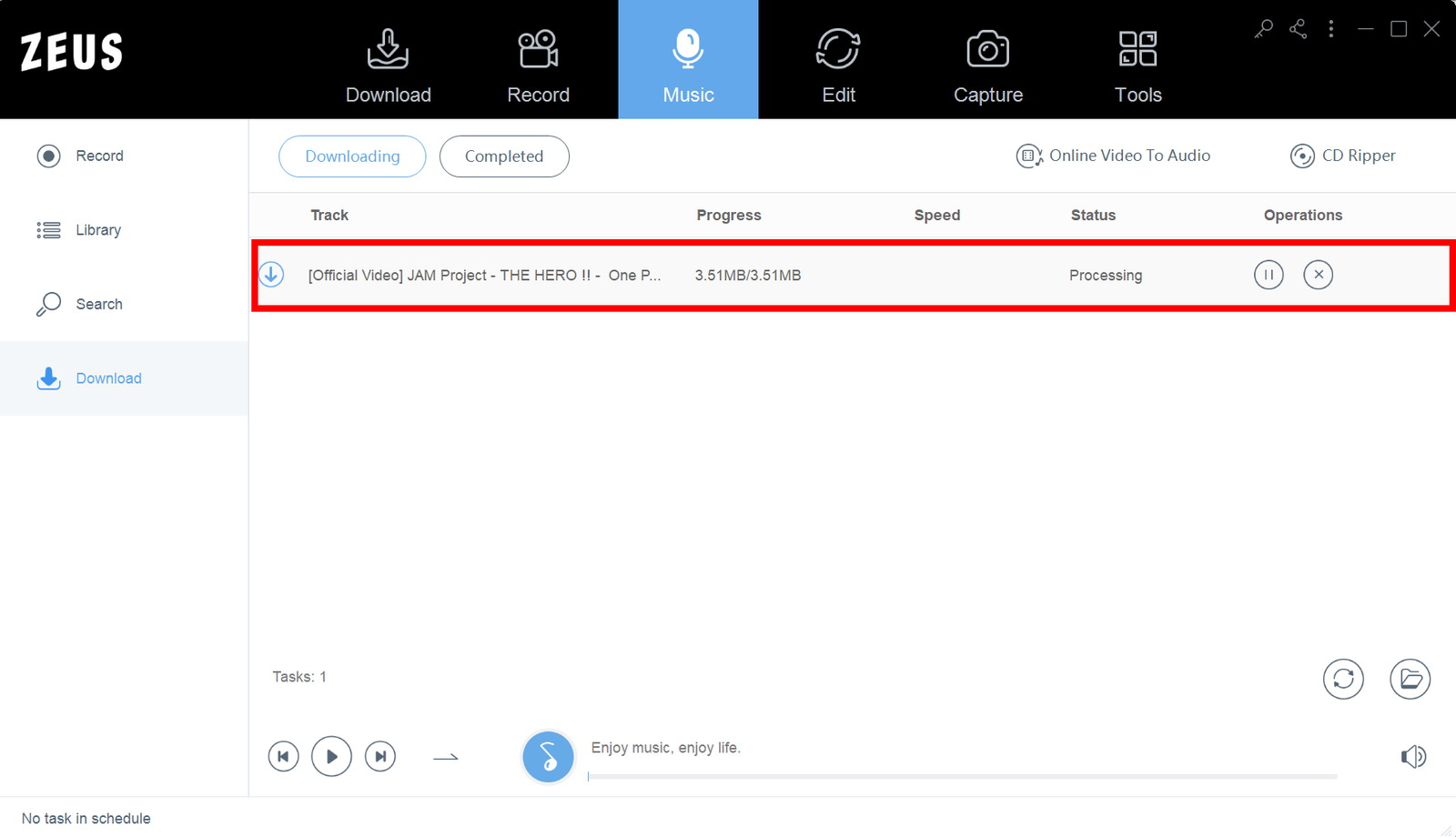 Once the download is completed, the downloaded file will be transferred automatically under the “Completed” area. 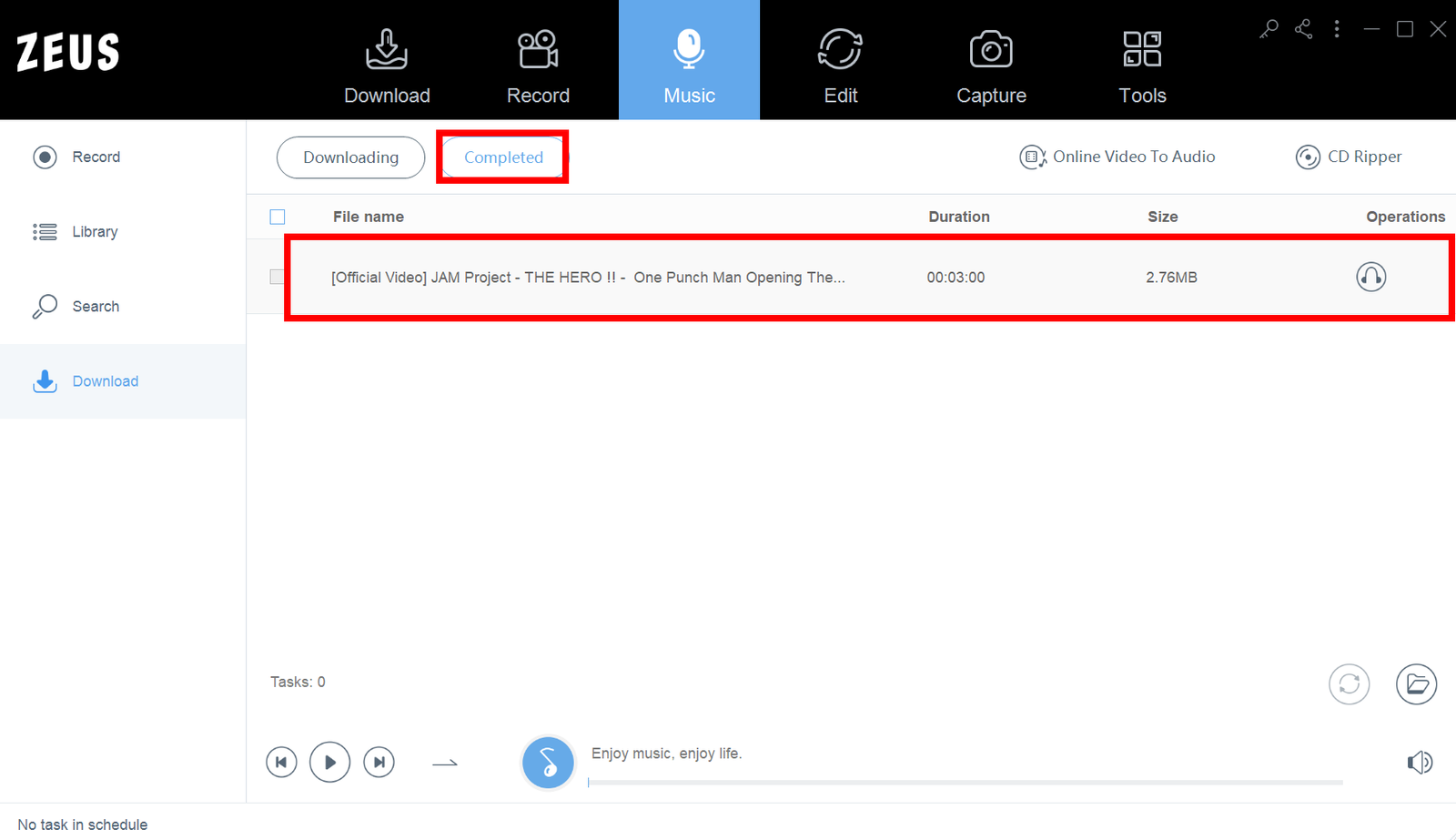 Step 1: Search for the One Punch Man Opening

Using your ZEUS MUSIC, go to the “Music” tab and head to the “Search” section. Type “One Punch Man Opening by JAM Project” in the search bar. Including the artist’s name will help narrow your search. A list of songs will show in the box below. Click the headphone icon to listen to the songs to see which one you want to download. 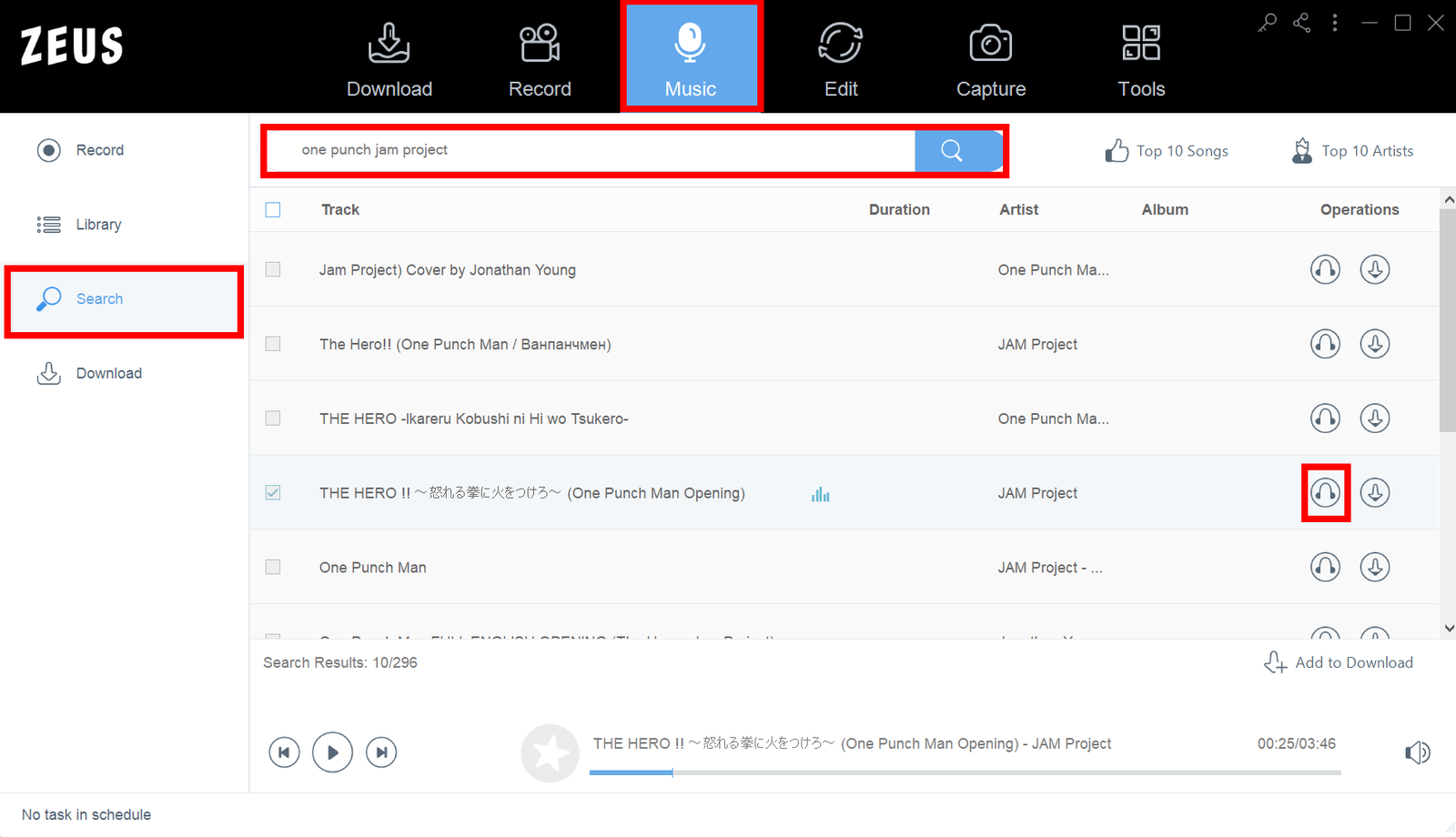 Step 2: Select the song you want 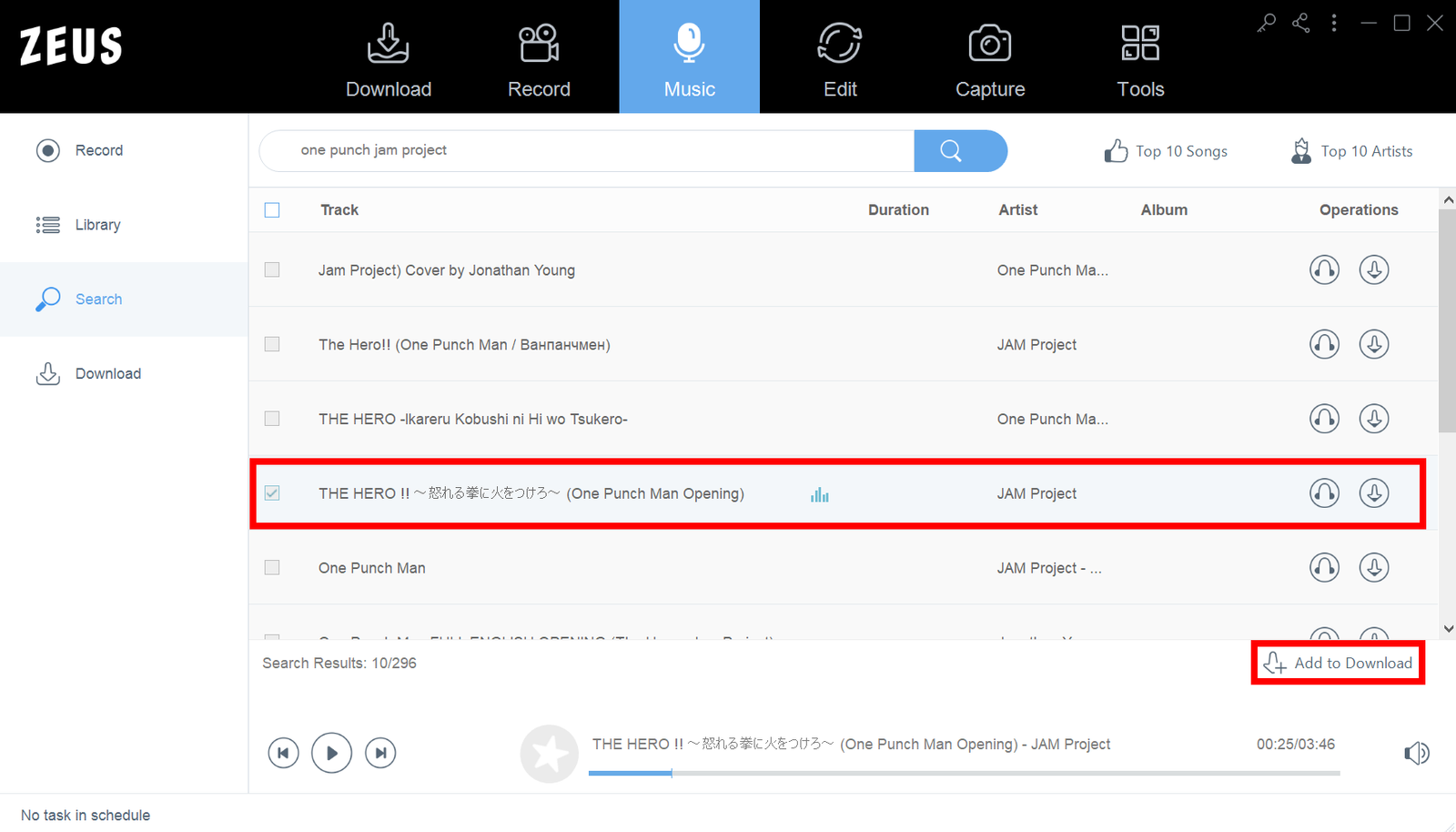 You’ll see your video in the “Downloading” area. Wait for it to complete.

Once the download is completed, the downloaded file will be transferred automatically under the “Completed” area.

He goes through an insane workout regimen to become stronger, and turns himself into the strongest person in the universe. By defeating all his opponents with one punch, he became bored and feeling unchallenged since he is now too strong for any monster. One Punch Man is a beloved anime. It’s the type of anime you watch to see monster battles, comedic scenes, and loveable characters. Join Genos and his master’s workout routine by listening to JAM project’s, The Hero!! Set fire to the furious fist. Download One Punch Man Opening with ZEUS MUSIC!

ZEUS MUSIC is a video software that offers numerous ways to download video and music. You can use links, embedded browsers, search engines and a recording feature to get your desired music or video. It also comes with a converter and built-in editor for your creative media needs.